The Acer Nitro 5 is one of the best gaming laptops out there in the mid-range category, featuring strong, high-performance hardware, and an amazing 144Hz IPS FHD display. It may come as a surprise to you then, to know that Best Buy is currently hosting a mega Memorial Day deal on the Acer Nitro 5.

Ahead of the release of the new Acer Nitro 5 gaming laptop (2022 version), we’re seeing some deals on the older models. You can save a massive $100 off the Acer Nitro 5 right now over at Best Buy.

This Acer gaming laptop features some of the best mid-range hardware on the market, power becomes an issue in laptop form factors, but it’s no issue with the Acer Nitro 5.

The Nitro 5 features an Intel Core i5 11400H processor, to crush any and all computations you could ever throw at it, whilst retaining that sweet power efficiency i5s are known for.

Powering the graphics, we have a GTX 1650, one of Nvidia’s finer laptop-grade GPUs. The GTX 1650 packs a punch, all while allowing the laptop to remain thin and light.

The RAM capacity is okay too, with 8GB of DDR4 @3000MHz to play with, your CPU will be adequately supported. We usually recommend 16GB of RAM, but it’s not really necessary for components of this performance point. It’s very likely that the Nitro 5 has a spare SDRAM slot to add in your own RAM upgrade, as most laptops have this feature.

The Nitro 5’s screen specifications are pretty impressive for a laptop at this price point. The 1080P IPS display runs at 144Hz, making the Nitro a 144Hz laptop at a $700 budget. 144Hz is blisteringly fast compared to the majority of the gaming laptop market.

The Nitro also ships with a fully licensed copy of Windows 11 home and comes sporting a Lithium-Ion battery, capable of 8-hour continuous playtime.

*Prices are subject to change 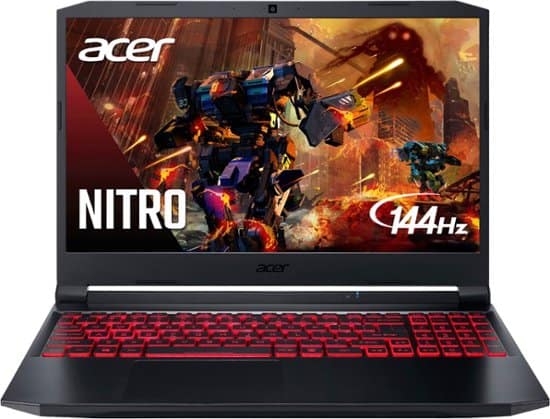 The Acer Nitro 5 budget gaming laptop is truly magnificent. Acer is known for its top-tier products and the Acer Niro 5 is no exception. With its sleek, stylish, and aesthetically pleasing design, not to mention the RGB backlit keyboard, it’s not a laptop to miss out on. Come and grab your early memorial day deal today!

What Is a Vapor Chamber Cooling Laptop? Do You Need One?