As I was waiting for someone at a Delhi hotel recently, I saw a gentleman coming my way. He sat next to me and curiously asked about the laptop I was using. “It’s a Surface Laptop Studio,” I replied. “Does Microsoft make its own laptops?” He admitted he wasn’t aware of the Surface brand but told me he liked the form factor of the Surface Laptop Studio. “It’s different from my MacBook Pro,” said the man who introduced himself as the owner of an architectural firm. This conversation just reinformed my belief that there will be takers for Microsoft’s experimental Surface Laptop Studio, which blends certain elements of the desktop Surface Studio and the premium 2-in-1 Surface Book. It’s a mobile workstation that’s also a sketching slate and a portable home theater. I have been using the Surface Laptop Studio for a few days, and I am in love with this device even though it is not perfect. Here is my review.

The reasons why I liked the Laptop Studio

It’s unusual, different, and a bit strange. It is evident people will notice you have the Surface Laptop Studio and it’s cool that this device has a differentiated look. At first glance, it might look like a traditional laptop with a solid, all-aluminum design and a hinge at the back, but the moment you pull the floating screen forward in front of the keyboard at 45 degrees, it becomes a whole new device. The Laptop Studio reminds me of the Sony Vaio Flip but the Surface team has done a better job by making the hybrid form factor slightly more useful.

The aluminum and magnesium construction is undoubtedly premium. The metal is treated in such a way that it gives a softer touch. The design is clean and simple, and I liked the matte textured surface. The laptop is noticeably flat but mostly angular everywhere else. The fan exhaust comes out from the grilles on both sides. 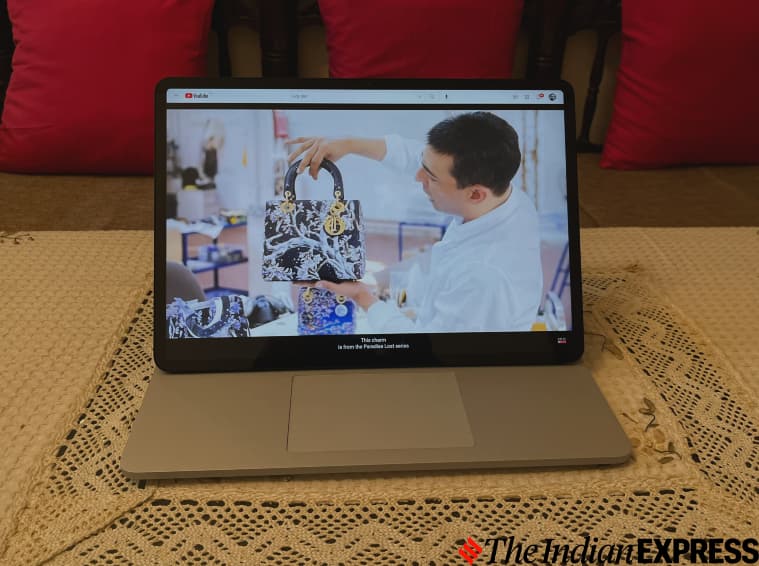 Things get a lot more interesting when you reach the top of the screen and twist it backwards. The screen pulls forward, letting you use the laptop in “stage” mode. Initially, you get a feeling of little resistance but in my second attempt it felt robust enough and I could easily pull the screen forward. Essentially, when you pull the screen forward, it gets stationed over the keyboard. Magnets hidden in front of the trackpad tightly hold the screen, so only the display and the trackpad are accessible with the keyboard completely hidden. The way you can pull the screen towards you is better suited for consuming content, playing games, or working on presentations. I used the “stage mode” to watch YouTube videos during breaks in between work.

A digital canvas for designers

Another way of using the Laptop Studio is by turning the device into a drawing board. The screen lays flat when you fold it down in the “studio mode”, though it sits at a slight angle. This mode is designed to be used with the Surface Pen (more on that later), letting you take notes and do serious graphics work. That to me is game-changing if you happen to be an architect or a designer who needs a professional, studio-quality device on the go.

I recently went back to the drawing board and started designing handbags in my free time, and I found the Laptop Studio changed the way I work. When I have to sketch and hash out rough ideas, I take a small break from work and start working on designs quickly. With the Surface Laptop Studio, I get a single device for work, sketching, and entertainment. With an expansive 14.4-inch touchscreen, the Laptop Studio becomes a drawing board, I don’t feel like running out of space. I could have used an iPad Pro for drawing but then that’s a separate device with a different OS and ecosystem.

It’s not a tablet, and doesn’t feel like one

I have to confess that I really like 2-in-1 Windows laptops but I don’t see them closer to a tablet form factor despite brands constantly proving those devices are made to mimic the latter. The Studio is not a tablet, and it’s a good thing it’s not made to look like one. This device is 18.9mm thick and weighs around 1.8kg. It’s meant to be used on the desk rather than gripped with both hands, and that to me makes sense. Because when drawing or doing graphic design work you want a device to lay flat, I didn’t want it to be tinny. Probably because it’s so large and has a noticeable heft and thick base. As I have mentioned before, the display doesn’t lie completely flat in studio mode. Rather, it’s propped at a slight angle, which is helpful for sketching and designing.

I knew that from the beginning, the Laptop Studio would be on the heavier side, but it’s still portable and lightweight to be carried easily in your backpack. The point people often miss is that the Laptop Studio is designed to replace a creative-focused desktop computer, and therefore the sleek design is not something one should expect from it. A gorgeous screen, plus terrific speakers

The Laptop Studio uses a 14.4-inch IPS LCD screen with 2400 x 1600 pixel resolution, 201 PPI. This 120-hertz display is incredible. Since the screen refreshes up to twice the rate of a regular 60Hz display, the animations are significantly smoother. The screen is so bright and clear, it makes every text and app shine.

I like displays on Surface devices also because of the 3:2 aspect ratio, which is perfect for productivity. They create extra vertical space for documents and reading text on websites like indianexpress.com. You will love the screen, even if it is not of OLED or miniLED type.

But what about the speakers on the Surface Laptop Studio? Well, are they good! The device comes with four speakers on board. At maximum volume, they can fill the entire room with music. I watched RRR and felt like I was in a movie theater. I was surprised by the balanced audio experience and stereo separation. In fact, these speakers are better than those I’ve used on many laptops over the years. My favourite part of this laptop is the keyboard. This is impressive, almost at par with the MacBook Pro’s keyboard. It provides just the right amount of travel to make it feel satisfying. I made fewer typos thanks to the full-sized keys and adequate spacing between them. The same goes for the trackpad. If you are coming from the MacBook, you will get a similar feeling. The trackpad uses haptics, giving the impression of a physical click when the trackpad is actually static. It feels totally normal to me, and it works.

The moment I set up the Surface Laptop Studio, the first thing I tested was its webcam. I immediately jumped into a Teams call to check the built-in 1080p webcam. The video quality was impressive for a computer webcam. Microphone performance was especially good. It has Windows Hello recognition for logging in, something expected on a Surface machine. At the heart of the Laptop Studio is the Core i7-11370H quad-core processor and Nvidia GeForce RTX 3050 Ti graphics chip, paired with 16GB RAM and 512GB of SSD. I tested the above configuration which will cost Rs 2,15,999. Don’t go for anything less than the i7 processor; it makes no sense to settle for an entry-level model if you want a Surface Laptop Studio for pro-level tasks.

The Laptop Studio is a competent machine, designed for serious work and gaming. Whatever you want to get done, be it video editing, editing images using Adobe Lightroom, or web browsing, this device will handle it with no dip in performance. The device is made for resource-intensive tasks, meaning you can run any professional-grade software on this machine. The Laptop Studio can also run AAA games, with some games reaching up to 60 fps. The device remains completely silent most of the time. Only when playing games or when rendering video I could hear the low roar of fans.

Surprisingly, the battery life is impressive, lasting between 8 and 9 hours of light work which includes browsing, writing, and editing copies on Google Docs, listening to Apple Music, and watching YouTube videos. Of course, if you’re really pushing it, the bottom will warm up a bit and the battery will drain. But the battery didn’t drain at the rate I expected. And now for the reasons to not love the Laptop Studio:

Lack of ports: The port selection is limited, strangely. The Laptop Studio includes just a pair of Thunderbolt 4/USB-CA ports, a headphone jack, and a Surface Connect port for using the included charger. For a high-end, creative-centric laptop, the Laptop Studio is thin on ports. Even the MacBook Pro lacks enough ports, but you at least get four Thunderbolt 4 ports.

The rotating screen is limited to two positions: What’s really curious, though, is that the rotating screen is limited to just two positions. In comparison, the kickstand on the Surface Pro 8 offers a number of angles. When you want to work on a desk, you can pull out the kickstand and lay it down almost flat, which is great for writing with the pen and sketching.

Surface Pen 2 is not included: Underneath the laptop near the touchpad is an area where you can attach the Surface Slim Pen 2 for charging and pairing. The Pen 2 is held securely in place, thanks to strong magnets. But the Surface Slim Pen 2 costs another Rs 12,000 and does not come as part of the package. The pen otherwise is easy to hold, supports tilt, and has 4096 levels of pressure sensitivity. It also provides haptic feedback with supported apps. Should you buy the Surface Laptop Studio?

As I said in the beginning, the Surface Laptop Studio is an experimental device. You either like it or you don’t. Its unique design has certain tradeoffs. I ultimately liked the Laptop Studio despite the few compromises. And for those asking me whether the MacBook Pro is a better deal or not, let me tell you this device will appeal more to designers and artists who want a laptop that doubles as a drawing board. The stylus compatibility and the way the Laptop Studio turns into a drawing screen is an added advantage and its USP. Sure, the MacBook Pro has better specs. However, they are not equivalent devices. For me, the idea of appealing to the artist community with a laptop with an off-beat design works, even if the device costs a little more than rival Windows 11 laptops with similar specifications.